Keep An Eye on This Guy

Promised myself I wouldn’t start this article this way but it really is appropriate.  This artist really did strike while the iron is hot.  Stryker by name and Stryker by trade.  Here is the story of one of the Southcoast’s newest phenomenons.

I first met Jeff um, Stryker as he is better known and prefers to be called, at a local gallery.  Funny, he reminded me of an old rocker I once knew called T-Bags.  Stryker impressed me right away as a kind, solid human being.  If you were to judge the book by its cover, that might not be your first impression of the man.

He, his wife and I were at another local artist’s (Victor DaSilva) vibrant opening reception.  I had heard he was an artist and saw a few of his pieces on Facebook.  In conversation, I found out that the rocker vibe was real!

Rock he did.  Stryker said that “After 30 years rocking all over New England with bands such as Altar, Love & Opium, “ZeroGodZ” and Blind Rhino, I decided to hang up my ax in 2011 and pursue new artistic outlets.”

We all hit that point – what am I going to do with my life now?  If you haven’t, you will.  Trust me!  I also found that he had faced some heavy personal challenges.

At this point, you’d expect the typical story of the veteran rocker.  You know substance abuse, infidelity and motel room trashing.  Not so.  His challenges were those a truly devoted husband and father would take in stride and, in love.

What’s wrong with this guy?  He’s totally messing up the stereotype.  Fast forward to his art show.  Huh?  He’s a musician.  Anyway, it really was his art show; his first.  So, this “first solo show ever” of his was exhibited in the Fredrick Douglass Gallery in December of 2012 at Gallery X in New Bedford.

I had planned on attending this show for lots of reasons but the weather, the holidays and everything seemed to get in the way of it.  All the more determined I finally got there.  When I walked in, I was floored.  The show was hung salon-style with what seemed like a hundred pieces or more.

This rocker turned painter had created a little over five hundred pieces of work.  He accomplished this in just under two years.  That’s almost a piece of art a day.  Wow!  As we got to talking he told me, “I create art every day from dawn till dusk.”

According to Don Wilkinson writing in his Art Beat column for South Coast Today (aka Standard-Times)  about Jeff Stryker’s first solo exhibit, “A newcomer to the visual arts, former rock musician Stryker Jeff is a bit of an enigma. Without any formal training — a true “outsider” artist — he has produced a large body of work, much of it quite handsome.

While his paintings are striking (if a bit naive), his sculptures, made from wire and discarded electronic parts, recall Giacometti and Modigliani. Keep an eye on this guy.”

Don pretty much says it all.  But, it wasn’t just a review.  It was an end of year piece titled: 2012 Offered Artistic Nourishment.  It called out the “Top 10″ of the South Coast’s, “…artists, curators and gallerists who have provided the community with some remarkably memorable imagery.”

“People seem to be drawn to my work which,” says Stryker, “I describe as ‘Something Different.’  I have shipped art to Canada, Italy, Kuwait, England, as well all over the U.S.”  It all started as, “…a hobby to fill the void of not playing music anymore.”

So, here is a local phenomenon who is a few short years is making a living in New Bedford doing something he truly loves.  Stryker’s work sells from between $15 to $700 and is available in Gallery X and the 767 Exchange in downtown New Bedford.

I don’t know what is more intriguing; that he is completely self-taught or that he is one heck of a natural.  He accepts commissions.  And, as much as he enjoys sitting down with friends and fellow artists Jim Charette, Frankie B Washington and Victor DaSilva Jr., he’d love to be able to work in New York City someday.

It may be an understatement…

To say that he doesn’t feel overwhelmed sometimes with the praise he’s received.  He says his wife and daughter are his inspiration. But, many folks in the local art community see an incredible connection in style to several major artists such as Giacometti and Modigliani, two of which Don Wilkinson mentioned in his article.

Stryker has no idea who they are.  Although he may be naïve about art at this stage in his development, he is by no means ignorant.  If there really is such a thing as raw natural talent – he’s got it.  But what is perhaps most amazing of all for this self-taught artist is the ability he has to put emotion in his work; specifically his sculptures.

These works of wrapped electrical and other wire could, in the wrong hands, come off as kitschy or overly commercialized.  Not so in Stryker’s hands.  The wire really does bend to his will.  As Mr. Wilkinson said, “Keep an eye on this guy.” 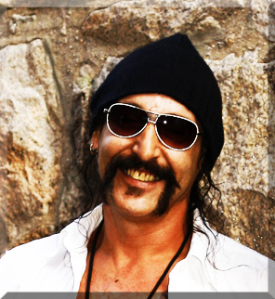