One of the preeminent and dynamic art spaces in the Southcoast is the University Gallery (University of Massachusetts Dartmouth) in the Star Store Building in downtown New Bedford. Much of that can be credited to the efforts of its’ long-time director, Lasse Antonsen.

He is a prominent figure in the local art scene, not only as a gallery director and curator but also as a strong visual artist in his own right. Born in Copenhagen, Denmark, in 1947, Antonsen studied art in that northern European city at the Experimental Art School.

After relocating to the United States, with his then-wife in 1978, and having the realization that he wanted to pursue a career in the museum profession, he began taking classes at the Harvard Extension Program. He also began working at the now-defunct Impressions Gallery on Boston’s Newbury Street, a space that specialized in works-on-paper.

He received a full scholarship to attend Tufts University and began graduate studies in art history, specializing in 1930s Picasso. While still a graduate student, the ambitious Antonsen accepted part-time positions teaching at the Museum School (in Boston) and working as a research assistant at the Institute of Contemporary Art.

He was soon hired by the Danforth Museum as a full-time curator, and his duties as such understandably elongated the duration of his graduate studies. Receiving his Master of Arts from Tufts in 1986, he was offered, and accepted, a position at Southeastern Massachusetts University, which would eventually become the University of Massachusetts at Dartmouth.

At one point, Dr. Brazil stood at the entrance to the gallery at the College of Visual and Performing Arts building (also known as Group Six) and assured his new hire that as gallery director, he would be granted unfettered academic freedom to pursue and present exhibitions as he saw fit without interference from the university at large… albeit with a very limited budget.

A curatorial commitment to art that dealt with multicultural issues (with a particular interest in South American art in general, and Brazilian art in particular) and feminist art, among other reoccurring themes and sensibilities.

Some of the highlights of Antonsen’s curatorial efforts included exhibitions by the late feminist painter/printmaker/collagist Nancy Spero, and the Cuban-American artist Ana Mendieta. Mendieta, who called herself an “earth-body artist” and blended some the conceits of both the earth art and body art movements, died under mysterious circumstances in 1985.

Her husband, the minimalist sculptor Carl Andre, was acquitted of murder, but not all in the art world are convinced. Her death was caused by a fall from the 34th floor of a Greenwich Village apartment, and has been ruled “an accident, or possible suicide.”

During the age of perestroika, the late 1980s dismantling of Soviet political and economic systems and a softening of attitudes toward the West, Antonsen mounted an exhibition of the so-called “Moscow Conceptualists.” This loose-knit group, anchored by the art duo of Russian-born American artists Komar and Melamid, used the conventions of appropriationism and conceptual art to subvert Soviet socialist ideology.

Another significant show presented by Antonsen…

Was an exhibition by the Portuguese artist Pedro Cabrita Reis, who works in a variety of media, including drawing, printmaking, photography, and sculpture. Pedro Cabrita Reis went on to represent Portugal in the 2003 Venice Biennale.

The Portuguese hold a special fascination for Antonsen as evidenced when asked about the sensibilities of a European-born curator as opposed to an American-born curator. He speaks with genuine admiration of the uniquely American concepts of frontier exploration and youth culture.

The ability of an American to move from Boston to Austin and reinvent oneself is always about looking toward the future, and about manifest destiny, in both literal and figurative understandings. Although one does not easily assume a clear connection between the Danish and the Portuguese, the common thread, in Antonsen’s eyes, is an old European sense of nostalgia, or more specifically, melancholia.

Antonsen points to Fado, the Portuguese musical genre, which often resonates with a quixotic longing for something or someone…the sea, the past, a bygone lover. It is Antonsen’s belief that fado – and other manifestations of Portuguese culture that are prominent in the area – such as a certain approach to backyard gardening – reach back, romantically, to the past, and signifies a particularly European depth that he embraces as a Dane.

Whether or not his curatorial choices had ever come into conflict with the University in the form of objections from a president, chancellor, dean or another party, Antonsen happily commented on the commitment to academic freedom espoused by Dr. Brazil and others but did mention a case of “almost” censorship.

In the late 1980s, the photographer Robert Mapplethorpe’s X Portfolio, part of his traveling exhibition entitled The Perfect Moment, struck a nerve in the national consciousness. The outrage- which came from the right of the political spectrum- centered on images that were sexually graphic and homoerotic, and funded, at least in part, by the National Endowment for the Arts, which is, ultimately, funded by taxpayers.

Also around that time, in the local news that soon became national news, Father James Porter, a priest from the Fall River diocese was accused (and eventually convicted) of pedophilic molestations. Against this backdrop, Antonsen mounted a show in response to the Mapplethorpe controversy entitled Naked: In a Time of Censorship – An Exhibition for the Whole Family.

The show exhibited art that some might have found disconcerting…

Well before Gallery X ever mounted a Sex at the X show but it was not what hung in the gallery that was at issue. It was the poster that promoted the show. It displayed a picture by the well-known photographer Jock Sturges (best known for his images of adolescent young women and nude beach scenarios) of his two toddler-age boys, their “boyhood” clearly evident.

Antonsen distributed the posters throughout the University community, and many secretaries happily push-pinned them to the walls behind their desks. However, he received a telephone call from a “higher-up” on campus, who asked if the poster would be mailed out, with concerns that a photograph of young naked boys delivered by the United States Postal Service might be a violation of the child pornography laws.

Dartmouth decided to send the poster to the University of Massachusetts officials in Boston to determine a course of action (or non-action). However, the poster could not be mailed to Boston (for fear of violating the child pornography laws.) A private courier was hired. Boston delivered a decision.

The poster was not a problem: mail ‘em! The show was a resounding success and a testament to both academic freedom and Antonsen’s intellectual fortitude. As gallery director, Antonsen’s duties encompassed enough that exhibition assignments were sometimes delegated to others, who, effectively, act as curatorial subcontractors. He oversees the beautiful gallery at the Star Store Building, as well as the gallery at the Group Six Building on the North Dartmouth campus.

The Group Six Gallery is, in Antonsen’s words, “a celebration of the University itself.” That gallery presents work by alumni, by faculty upon return from sabbatical, and by students, particularly by juniors on the cusp of their senior year.

Antonsen sees the mission of the University Gallery at the Star Store Building to be one of education, information, and intelligent entertainment, both to the student body and the community-at-large. It remains a delicate challenge for any gallery director – especially at an educational facility – to present significant and accessible material to a wide community, without appearing to be “dumb-downing”, or, conversely, without the specter of elitism.

However, Antonsen manages to pull it off with style and panache. Beyond his role as gallery director, Antonsen is an important artist in the community, although his artwork is difficult to categorize.

It embraces sculpture, taxidermy, natural history, theatre, and site-specific installation, and is somehow all and none of those. It should be noted that what Antonsen does in his own work is not far removed from his curatorial sensibility.

His assemblages, which can include anything from armadillos to…

Sexually suggestive botanical pods, speak to the art of selection itself, as well as the collection, and display, with an almost obsessive-compulsive drive.

Antonsen, who maintains a studio in the Hatch Street Building in New Bedford’s north end, with his wife, the fabric artist Elin Noble, had at the time this article was originally written, an exhibition at Gallery 244 in the Star Store Building that will be up through June 30th.

That show is called Chinese Christmas 2009 (Poinsettia) and features approximately 45 different artificial poinsettias, displayed at eye height, and a line of text from the French poet Victor Segalen. He recently had a well-received exhibition, entitled Theatrum Naturae et Artis at the Narrows Center for the Arts, in Fall River, which spoke to a sense of theatricality and playfulness.

He, along with other College of Visual and Performing Arts (CVPA) faculty at the University of Massachusetts Dartmouth,  attracted a group of local artists to respond to an invitation from the Whaling Museum to focus on an object from their collection.

In December 2010, Antonsen will be one of fourteen artists in Fatal Transgressions: A Septette at Luis Villanueva’s Colo Colo Gallery in New Bedford. Each artist will present work about one of the seven deadly sins: Antonsen takes on the formidable subject of envy. In 2011, he will act as a guest juror at Galley X for a show titled Beg, Borrow or Steal: Art Making in the Age of Appropriationism.

Finally, when asked where he sees the greater New Bedford art scene to be in ten years, Antonsen answered simply: “Flourishing and very strong.” With Antonsen as a key figure, that scenario seems certain. 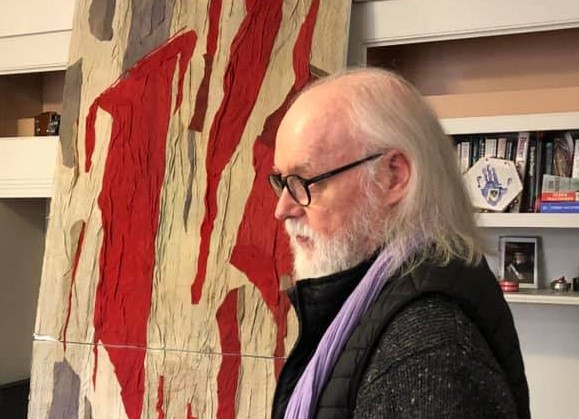 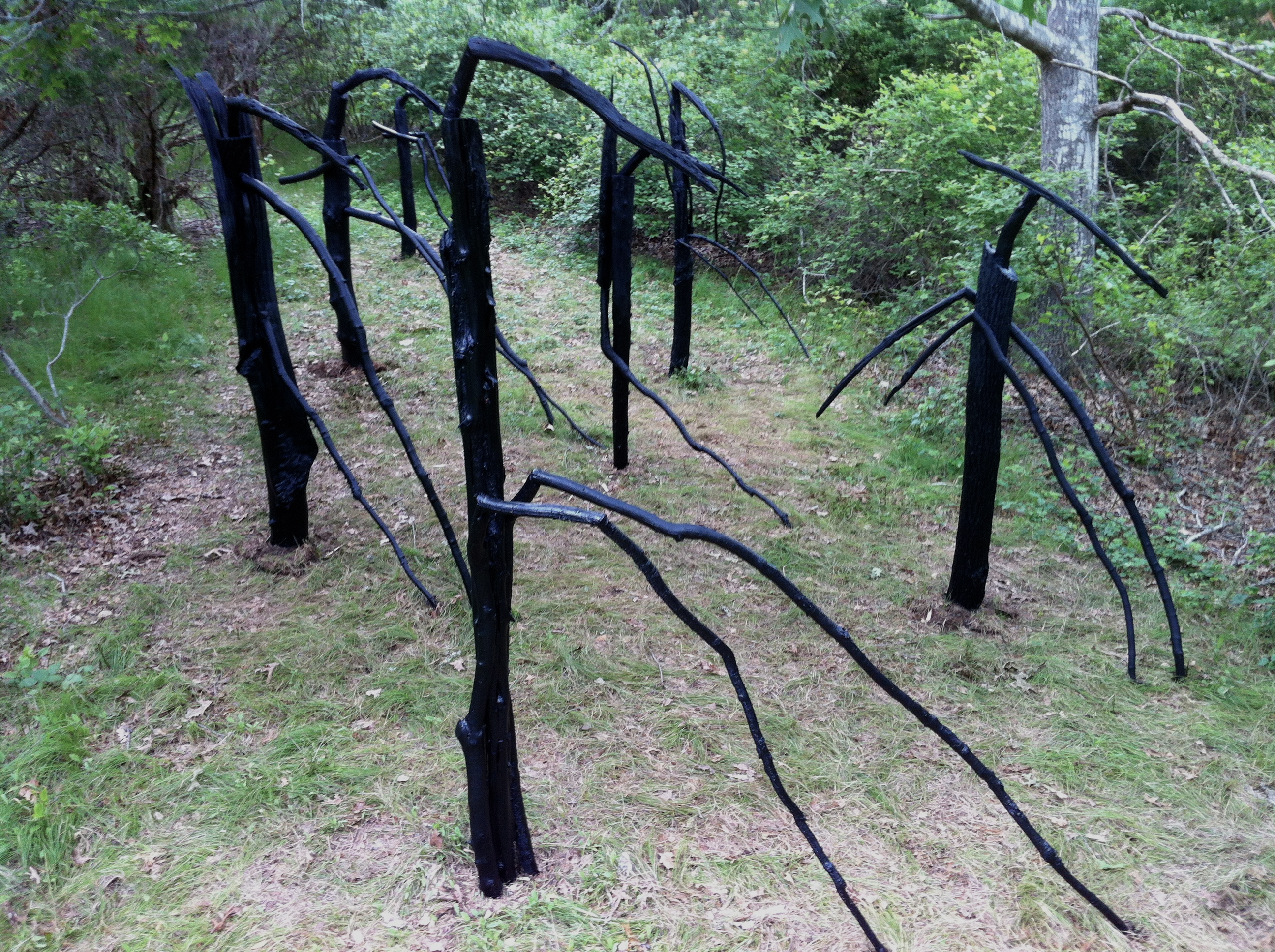