A Prophet in Isolation

In the north end of New Bedford, not far from Brooklawn Park, there is one of those old red brick buildings that were once ubiquitous in the city, but grow scarcer in the name of development.

Once part of the sprawling Nashawena Mills complex, that shuttered its’ doors in 1958, as the textile industry went south (both literally and figuratively), it now houses over two dozen artist spaces and is commonly referred to as the Hatch Street Studios.

That building is the creative home of some of the community’s most well-respected artists and craftspeople, including printmaker and photographer Marc St. Pierre, haberdasher Nicole St. Pierre (who recently passed away in December of 2019), painter David Baggarly, charcoal artist Huguette Despault May, printmaker Adrian Tio, artisan Nancy Alexander, photographer Neil Alexander, and too many others to list in this space.

On one of the upper levels of…

That creaky old, magnificent building, where the painter and printmaker Michael Hecht maintains a large studio, brimming with canvases, drawings, and prints, pinned high on one wall, there is a piece of pink cardstock with this text crayoned upon it: “repellant, bodily, excessive, materialist, bestial, obsessive, feverish, ecstatic, convulsive, passionate, terrifying”

All of the curious words – and many others – aptly describe Hecht’s work. Throughout the studio, there is a collection of straightforward images and/or subtle references to a wide range of subject matter, entanglements between the “real” physical world and one that borders on the symbolic and metaphysical.

The images include owls and other raptors, the sun, Cerebus (the three-headed dog that guarded the Gates of Hell), centaurs, sexuality, bodily functions, self-mutilation, and totems of all kinds. Born in Sioux Falls, South Dakota, in 1968, Hecht recalls, that as a child, he was pleased to experience “praise for natural talent,” but knew of no direct connection – as many visual artists do- to a particularly creative relative… no cartoonist second cousin, or a grandmother who made pots.

He recalls growing up with a yearning

“To head to the east coast and become an artist.” As a child of divorce, Hecht had little contact with his biological father until later in life, when he became aware of a paternal aunt who had received a degree in art education (but never taught) and a paternal uncle who did stained glass work.

As in many art institutions, there were strong overlaps and connections between the printmaking and painting departments. Hecht soon became one of those “slash” artists: the painter/printmaker. As he explains, “I never abandoned printmaking, but more and more, I painted, and it balanced out my interests and focus.”

Several months after receiving the BFA, in 1991, Hecht relocated to Boston, where a college buddy initially put him up. He began teaching part-time at the Montserrat College of Art in Beverly. In September 1996, he began graduate studies at the Massachusetts College of Art and Design in Boston, receiving his MFA in 1998. As a printmaker, his primary focus was on serigraphy, more commonly known as screen-printing (or erroneously, silk screening.)

Hecht accepted a teaching position at the School of the Museum of Fine Arts, also in Boston, and more commonly and simply referred to as the Museum School, continuing with a focus on screen-printing. Hecht taught a variety of students: undergrad, grad, non-diploma, and continuing ed. All the while, he was developing a strong body of work as a painter, printmaker, draftsman, and occasional sculptor.

The painter/printmaker Pat Kellogg, whom he had met at the Museum School. This is more than a simple biographical notation, as Kellogg is a very real and figurative presence in Hecht’s artwork.

As a reoccurring subject, Kellogg appears in Hecht’s work as muse, lover, bride, goddess, and an astounding array of female archetypes that Carl Jung would have embraced with an analytical fervor. Hecht himself is a frequent subject within his painting and drawings, though hardly in the staid manner of a traditional self-portraitist.

Yet another continuing presence in Hecht’s painting are birds of prey, with a strong emphasis on owls. Hecht explained that as a student in Iowa, he would often take night walks and often encountered screech owls as they fed on insects in the glow of the streetlights, and was able to approach them as they sat in the dense oaks.

“I connected to them…felt a kinship. They were silent, nocturnal, solitary, misunderstood…like me. Especially, the great horned owl… thought to be devilish…and solitary, except during mating season. The owls became a totem, “ according to Hecht.

Triangles. pyramids and prisms are other regular elements in Hecht’s work. Reading the writings of the mystic and renegade surrealist Georges Bataille, Hecht began using pyramids and related imagery as symbolic of social hierarchy, as well as potent metaphors for spirituality and shamanism.

If all this comes across as a bit too heady, assuredly it is not.

Hecht balances out the quasi-mystical and mythological influences with a dose of levity. As he notes, it is vital to “have a sense of humor when dealing with dark things. All of life is a contradiction.”

But despite the occasional subtle comedic elements, his work never becomes a visual punch line. And part of that is because his skills as a painter and draftsman negate any doubt about seriousness as an artist.

That said, he has one large scale painting that features a man in an awkward position as a fiery explosion of flatulence erupts. The title: A Prophet in Isolation in A Spontaneous Gesture of Truth.

That title may refer to Hecht himself is some relevant way. In one drawing, and with a sly nod to Freud, he combines Eros and Thanatos into one newly imagined being, the life-urge and the death-urge morphed into a singular haunting entity.

While referencing ancient Greek myth and Native-American folk tales, Hecht is never blatantly derivative. His work is about the development of uniquely personal mythology, a nostalgia wed with a Promethean ambition. 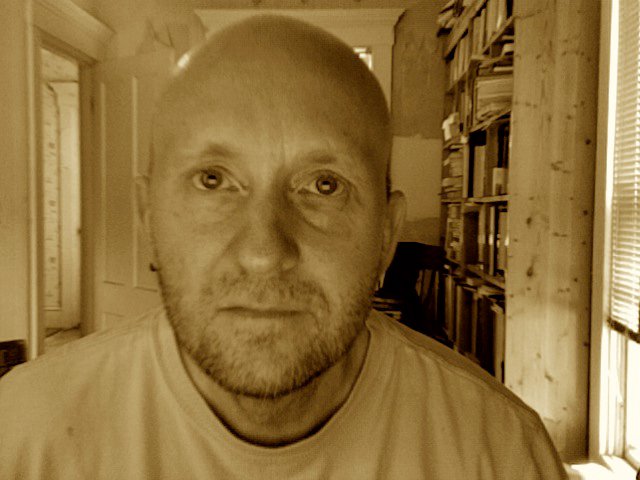 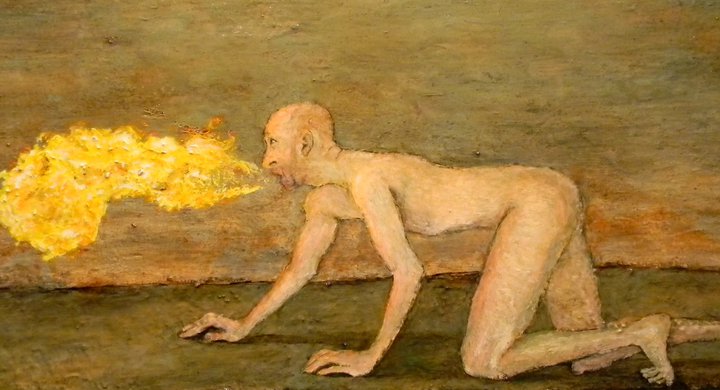