[written by Don Wilkinson – 2010] Susan Gilmore has been a vibrant element in the local art community- in a three-fold way as a sculptor, as a painter, and as a graphic designer- long before The Standard-Times, or anyone else. was referring to southeastern Massachusetts as the South Coast. However, it is Gilmore’s affinity for the coast that brought her into the greater New Bedford area. More on this later.

Gilmore said, “I’ve always made things. I’ve always made art. I was a huge fan of Lego’s and Lincoln logs… always collecting things, making things. I always had tree forts… the art-making has always been there.” She continued, “When I proclaimed that I wanted to be an artist- or a psychiatrist- my parents weren’t… happy.”

Gilmore’s father, a self-made man that owned and operated a data storage facility, and struggled to raise his children in better economic circumstances than those he grew up in, insisted that she attend a liberal arts college.

Just as she was graduating high school…

Her father’s business began feeling the effects of changing technology and he opted to close his business. It was unclear if college would even be a viable option under the altered financial conditions.

However, the elder Gilmore soon accepted a position at Digital Equipment in New Hampshire, and relocating his family from their roots in Acton and Weston, they were northern bound. Susan Gilmore, as a new New Hampshire resident, was able to attend Keene State College at a greatly reduced price, and she entered the program at that institution in September 1976. She graduated with an associate’s degree in liberal arts, two years later.

Gilmore then “took a year off” to consider a course of action for her future, the idea of becoming an artist still at the nag. During that period away from academia, her father helped her secure a job as a technical illustrator at Digital. But, perhaps, more importantly, she spent significant time sailing and boating, and those activities cemented a vital understanding: she needed to be near the ocean. Her love of the sea (and of the mountains, as she is an avid skier) define her.

She decided to apply to art schools.

And only two: the San Francisco Art Institute, and the long-defunct Swain School of Design in New Bedford. After visiting the Bay Area and the Grey Area, she opted for Swain. Clearly, a woman of a more Atlantic bent than Pacific, and though never what one would call a “city-girl,” Gilmore had an appreciation of New Bedford’s “edgy urbaness,” and moved to the Whaling City, with the expectation of becoming a graphic designer.

Graphic design was an acceptable course-of-study to Gilmore’s father as there was a clearly defined understanding and anticipation of graphic design as something akin to vocational training. Gilmore entered Swain in September 1979, as a sophomore, (as the school recognized her Keene experience as the equivalency of a freshman education).

As a Swain sophomore, Gilmore was immersed in the institutions’ fabled Foundation Program, taking classes in painting, drawing, printmaking, sculpture, and graphic design.In the summer between her sophomore and junior years, Gilmore worked as a low-level designer at the Whaling Museum, and that experience soured her on graphic design as a course of study.

The compromises made in the service of the client, seemed to her, at that youthful moment, to be a compromise of artistic integrity. She declared sculpture as her major… and didn’t tell her father… until December.

As a sculpture major, Gilmore was drawn to Russell Daly…

An instructor known as a “go-to-guy” for his exceptional knowledge of tools, technique and material sourcing. The instructor Robin Taffler, Gilmore remembers for “her generosity”…often taking the entire sculpture class- in her own vehicle- on trips to Providence or Boston- to see the latest and hottest new sculptor. Later, a newer instructor, Garrison Roots, made her think about juxtaposition as a key element in her growing visual vocabulary.

In what was known as an “independent study,” Gilmore studied with the painter Jacqueline Block, who helped her redefine the methods in which to use color in sculpture. Gilmore also notes Sig Haines, David Loeffler Smith, and Marc St. Pierre as being important mentors.

Gilmore graduated from Swain in 1982 as a sculptor. She was accepted as a graduate student at the Mt. Royal School of Painting at the Maryland Art Institute, in Baltimore, (yes, another coastal city) where she studied with the prominent abstract-expressionist painter, Grace Hartigan.

In Baltimore, she deepened her friendship with the painter Mark Barry and his partner, Sandra Magsamen, friends she had made at Swain. Her approach to art was cooler…more laid-back. However, two things would bring about an end to her studies in Baltimore… The first was her realization that a romance that began back at Swain with the artist John Race was too important to let go.

She returned to southeastern Massachusetts…

And in 1984, she accepted a position as a paste-up artist at Moore & Isherwood, a long-time New Bedford graphic design firm. She quickly moved up the ranks, to graphic designer, assistant art director, and then, art director. In her early days at Moore & Isherwood, significant clients included the Zeiterion Theatre, the New Bedford Symphony Orchestra, and the Economic Development Associations of New Bedford, and Fall River.

During this period, Gilmore did not waver in her efforts as a sculptor and painter. She embraced the crossover potential between graphic design and the fine arts. Painting and sculpture feed the design work with a heightened sense of color, form, and composition.

A common design element- typography- made its’ way into her sculpture and painting. She was a charter member of the 2nd Street Art Exchange and of Gallery X. And in 1988, she married John Race. In 1990, she became a mother to a son, Skylar.

Painting did not evolve from her sculpture, or vice-verse. They happened concurrently. Her paintings and sculptures are emotional. Her approach to the landscape- more often, a seascape- is passionate, her palette is vibrant, and her color sense is high in key colors. Her paintings are, primarily, of a dry medium.

She usually uses oil pastels. The color on her sculpture is not intended to be decorative- it is meant to redefine space with the application of hue, and, at this, she is largely successful. Her sculpture is ripe with objects found in nature and the architectural warehouse, material derived from a multitude of sources.

Written by Don Wilkinson and posted on the predecessor website to the Artists Index, The South Coast Artist Profiles. 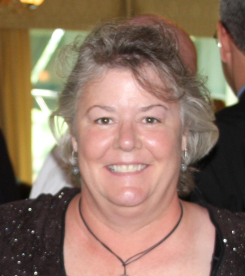