One man’s beauty is another’s ugliness

Maybe it’s all good. Maybe it’s good that one piece of art can especially engender varied and thoughtful introspective discussions while simply enraging others. This article is about a sculpture that may have racked up more lineage in newspaper editorials and articles than perhaps even the penultimate symbol of the Whaling City: Bela Lynn Pratt’s sculpture with three names.

The statue outside the New Bedford Free Public Library is actually titled the New Bedford Memorial but is also more popularly called The Whaleman Statue and sometimes it is referred to by the inscription on the statue: Dead Whale or a Stove Boat.

This statue has been celebrated, reproduced into bookends, lamps and commandeered to serve as a graphic for all kinds of personal and business purposes. Yet, in the public court of opinion, I don’t believe it has been written about as much as one particular piece of public art in the city of New Bedford.

One was the Blizzard of ’78; the other was the genesis of a storm of criticism that has lasted to this day. As the old children’s sing-song idiom goes – sticks and stones – or, what Texas-born artist James Surls’s Sea Flower, a sculpture; some would argue otherwise, has endured. And, let’s not leave the artist out of the equation.

He’s had to deal with the notoriety, too. In fact, The Sea Flower is a representation of a sea anemone. It has weathered the continuing buffets of Man and Nature for nearly four decades in front of the Hastings Keith Federal Building.

In a Princeton University article by Steven J. Tepper called Unfamiliar Objects in Familiar Spaces – The Public Response to Art-in-Architecture published in 1999, “One artist was quoted in the Asheville Citizen-Times as saying “Artists are used to sparking debate…. Art has to be on the leading edge of society or it wouldn’t contribute anything” (Sandford 1995).

On a lighter note, one citizen offered the following praise for James Surl’s Sea Flower in New Bedford, Massachusetts: “I think it’s just great… it is the burr in the pants of our city. Anything that gets as much reaction can’t be all bad” (Standard-Times 1978).

The federal building is located in downtown New Bedford, Massachusetts.

According to our venerable national institution, the Smithsonian, the Sea Flower is, “An abstract depiction of a sea urchin flower with wooden tentacles projecting from an orange-painted metal spine. The tentacles are eight-inch diameter wooden poles with points on the ends. Four of the tentacles are bolted to the cement pavement.”

The GSA, or General Services Administration’s Art in Architecture Program commissions the nation’s leading artists to create large-scale works of art for new federal buildings. The construction of the new Hastings Keith Federal Building in 1978 included the equally famous or infamous, depending on your point of view, sculpture.

Mr. Surl’s sculpture endures a tremendous amount of on again – off again debate, public and private outrage and provokes nearly every emotion imaginable. Even twenty years after its installation there was some serious thought to relocating the sculpture, (1999) to accommodate plans for a new Korean War Memorial which never materialized.

In an editorial to the Standard-Times on that subject, the writer oddly touched on the one thing I believe Mr. Surls’s artwork is either a victim of or guilty of – bad siting. The editorial stated, “…it isn’t hard to imagine that Seaflower [sic] could find a happy home somewhere in the newly rediscovered and renovated Fort Rodman, where vast new public spaces are being opened up…”

It is my opinion that the Sea Flower…

Another opinion of mine, and my last one, is that sometimes if a piece of art looks too simple to execute; then the purchase price shouldn’t be above an acceptable threshold – or, whatever the specific market will bear. In some courts of public opinion, the value of some art is dependent on what was paid for it and that cuts both ways.

Regardless of any reality; practical or otherwise, the talk hasn’t abated yet. In the December 02, 2012 Standard-Times, Jack Spillane, the executive editor wrote about New Bedford sculptor John Magnan. His new eelgrass sculpture was recently installed in front of the Buzzards Bay Coalition offices.

He refers to Magnan’s new work, titled Habitat, as a, “…a terrific series of seven, 12-foot steel, “grass statues” that pays homage to sustainability in our local waterways — a critical mass has been achieved in the New Bedford public art collection. The city seems to have reached a point where it regularly inspires its artists and craftspersons to manifest its very life through this most accessible of art forms.”

But it hasn’t always been that way.

As for the so-called man on the street, the article quoted comments such as, “Weird,” says one woman who just keeps on walking. “Definitely weird. “It would be nice,” says Bob Mello, of Fall River, “if the city came along and torched it.”

And the beat goes on… In a Standard-Time’s December 8, 2012 issue, Art Beat writer Don Wilkinson aptly wrote, “…many residents of New Bedford were rocked out of their complacency and/or indifference about the arts when a many-appendaged wooden structure seemingly materialized from out of nowhere in front of the Hastings Keith Federal Building. “Sea Flower,” a sculpture by Colorado-based artist James Surls, was the subject of much ridicule and derision, and worrisome complaints about wasting “taxpayer’s dollars.”

I’m telling you, it’s the space – or, lack of it. It’s been smothered as much visually by the lack of the space it sits in, as it has been by perpetual criticism. If public art is to be seen in public space, then it should have the space it needs to be presented as it should be. If you take the time to look at Surls’ other works. Again, just my opinion. Hard for anyone not to offer theirs isn’t it?

Not everyone hates it. It has its own Facebook page called – I Love the Sea Flower! The page states, in part, “Motta [New Bedford’s previous Marketing Director Arthur Motta] goes on to suggest that one shouldn’t think of New Bedford as an art-intolerant place–it is a small city with many cultural landmarks and rich history of monumental sculpture and art. But at the time of Sea Flower’s installation, a local newspaper survey found that 86 percent of respondents disliked the work.

A berm was added later…

o help the blind and elderly avoid hurting themselves on the piece. In 1986, the mayor and city council endorsed a request to have GSA remove it. Sea Flower stayed firmly planted. In 1999, the artist agreed to have the piece moved to make room for a Korean War veterans memorial, but nothing came of that effort, either. The GSA restored the dilapidated sculpture in 2001.”

In a March 2006 Standard-Times article by Rebecca Aubut called The “Thing” of Downtown New Bedford the writer starts her article with “Ever wonder about the sea urchin-type structure found in front of the Federal Building in Downtown, New Bedford?”

“That massive, weird-looking creation that seems to be completely out of place and appears to pop out in different directions, but with no real sense of where to go? You know the one I’m talking about, that wooden thingamabob that looks like an anorexic porcupine on crack. Are you with me now?”

It goes on, “…here’s a part of what that plaque reads to describe the artwork, ‘The sculpture’s lively organic form appears to float above the entry plaza… although monumental in size, the sculpture retains delicate energy.’ Who are they kidding?! When I went back to closely examine the sculpture, the only delicate energy I saw was the metal weeping into the wood and “delicately” streaming down onto the ground.”

I guess not everyone is familiar with Corfam steel…

And, it goes on as this article could because it seems, there’s no end to the story of New Bedford’s Sea Flower sculpture. I will finally end this article, however, with Camile Paglia from her latest book, Glittering Images – A Journey Through Art from Egypt to Star Wars, “In the still relatively young United States, a practical nation founded by Puritans, the arts have never taken deep root. Much of the general public has fitfully regarded the fine arts as elitist or alien and chronically begrudged them government funding, which remains minuscule and is recurrently threatened with extinction.

Written by Ron Fortier and posted on the predecessor website to the Artists Index, The South Coast Artist Profiles. 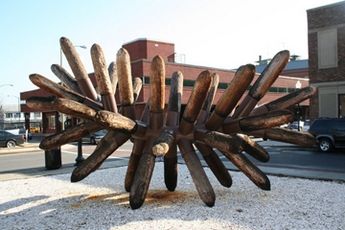 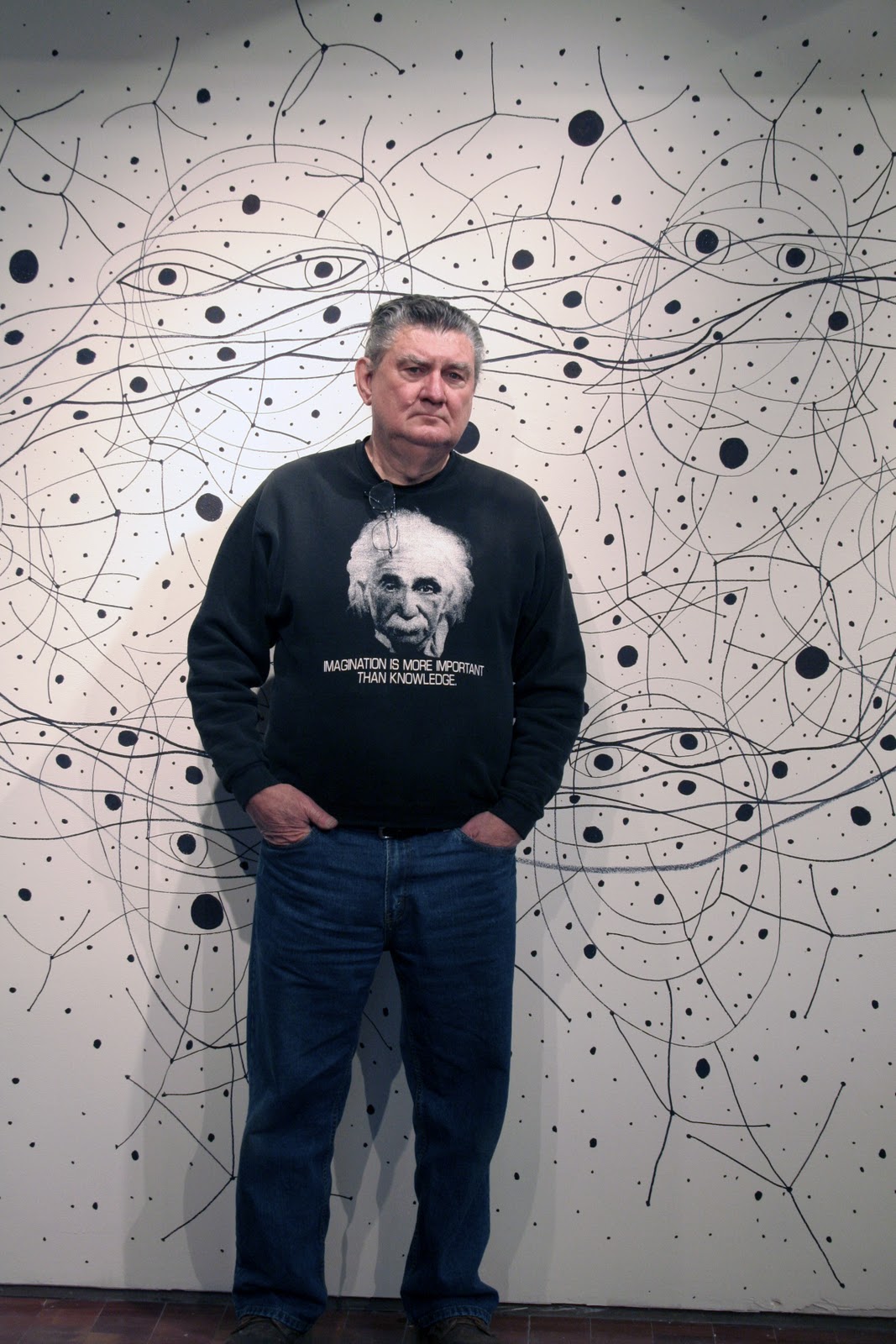 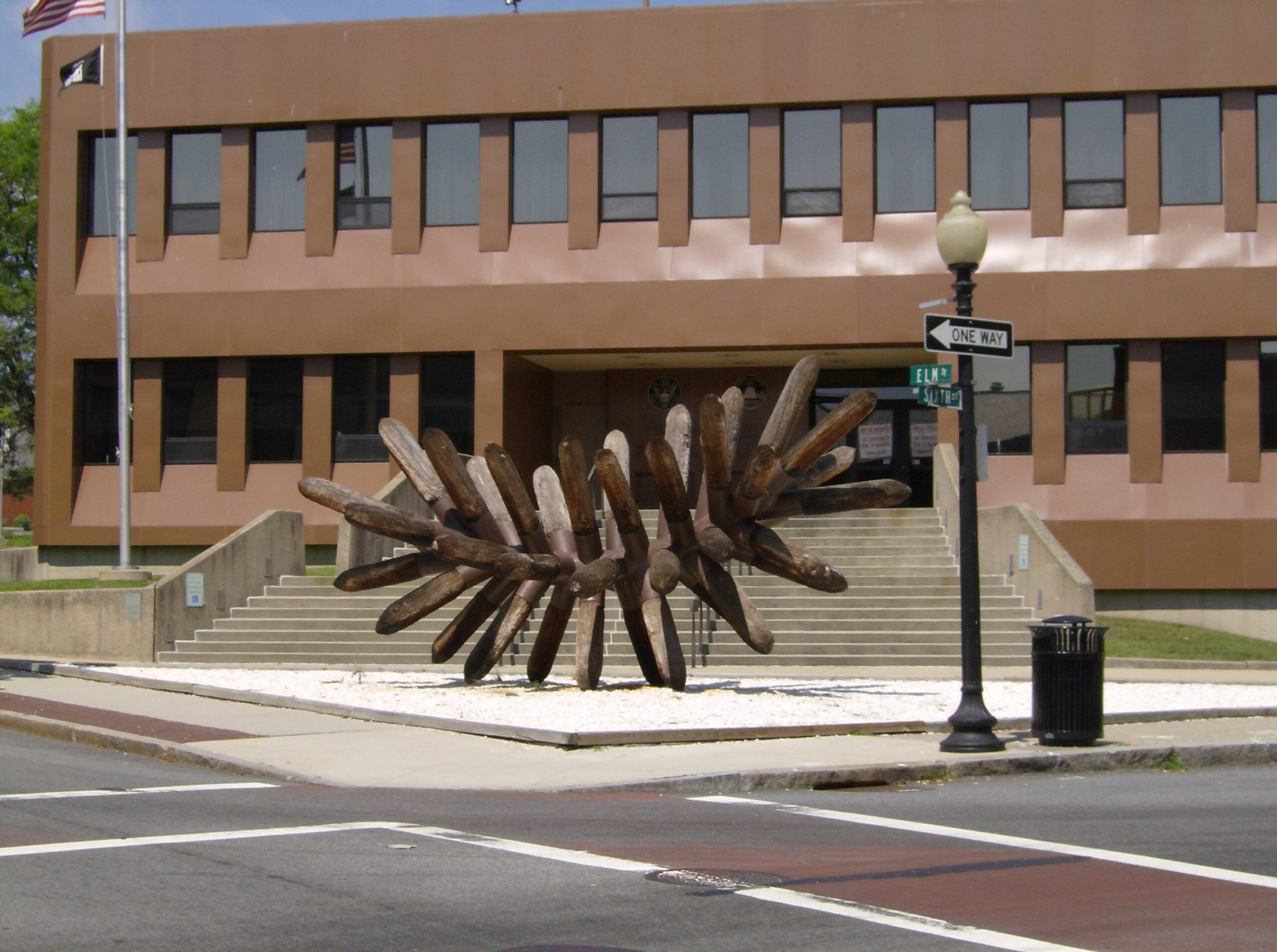