Spray It to Say It!

Aerosols, gouache, acrylics – oh, my! Zachary Meunier was born in San Diego and raised in New England small towns. According to him, “Some say I have a mix of the two coastal mentalities.” East Coast. West Coast. Bi-coastal. Bipedal. Bifurcation (splitting the main body into two parts). Most artists struggle to stand on their own two feet while navigating through a society that’s not always artist-friendly.

Zachary was, according to his childhood recollections a creative kid. He enjoyed playing with his Lego and Erector set toys. He loved the challenges of building elaborate forts. He also feels he was a bit over-aggressive decorating his many bedrooms. That was okay when he was growing up but what would he do as an adult?

Two years after graduating high school, he was idle and perhaps directionless. That is, until he, “Stumbled on the Image of a mural painting,” that was, as he recalls, “Larger than life!” What blew him away was the realization that a human and not a machine created what he was looking at an emotionally and intellectually reacting to.

It was at that moment that Mr. Meunier had his proverbial ah-ha moment and right then; right there, he clearly knew what he wanted to do with his life and, “…it was that!” The artist responsible for Zachary’s life-changing catharsis was German-born Mirko Reisser, aka DAIM.

As quickly as his spirits soared skywards, the realization of “how or where was he going to paint murals?” they plummeted just as suddenly. “I don’t remember how I picked up on it, but Artworks!, a non-profit In New Bedford, Massachusetts was recruiting teen mentors for their Teen Mural Program.” Zachary spent 6 Years with that program.

It’s where he says he cut is art teeth.

Many of the murals that he participated in creating are still in existence. That fact is important to note since outdoor murals are exposed to not only the elements but the buffeting effects of social change and evolving cultures.

Through the guidance and support, he received from the Artworks! program and his family, the aspiring young artist enrolled in the art program at Bristol Community College in Fall River, Massachusetts.

He finally decided to major in graphic design after, as he says, “switching around a few times.” Unfortunately, he couldn’t afford to continue his education there. He had to work to support himself and was not able to go to school full time.

However, by the time he was in his mid-twenties, he was comfortable enough with his skills and started working on his own. His job was his work and his life. Now in his early thirties, his art and his love of mural-making continues to, as he describes, rule and guide his life. He believes that he is fortunate to live in New Bedford and enjoy the burgeoning creative economy that he is both witnessing and experiencing.

How wonderful it is to…

“Get to make art daily in my studio and in the surrounding communities and share it through gallery exhibitions, commissions and continuing my youth mentoring,” he says. “I get to create my murals and am happy and I ‘m grateful for it. I look forward to a lifetime of creativity and can’t wait to see what creative opportunities the future holds.”

Mr. Meunier believes that art is a form of freedom if not freedom itself to create something from nothing; birth really. Freedom does have its price and bills do need to be paid but while he does what needs to be done to pay those bills, art feeds his soul.

He prefers to work large, especially mural-size or, as he says, “The bigger the better”, in order to get his entire body or machinery in the mix of the action. He tries out or practices his large-scale work of 8’ x 12′ or larger on his studio walls.

But, he does execute his art in a standard size scale. Regardless of the size of the work, he wants the public to either be attracted to the work or leave it feeling a “Simple appreciation for the form, design, and execution of the piece”.

Prices for his work range from $50 – $2500 and he does sell his work in various galleries in the South Coast area, as well as, Craigslist, his blog site, and Facebook. Who buys his creations? Schools, private businesses and restaurants. He also accepts commissions.

Zachary loves to work out of doors or, en Plein air, especially if there’s an audience. He considers the public at large his mentors since it is their perspective and opinion that he values because he doesn’t create for himself but rather, for them.

He is a self-described aerosol artist…

Or muralist if you prefer, and if he could paint anywhere, one of his choices would be the Moon since “everyone on our planet would see it”. Another flight of fancy would be to have the opportunity to “speak” with Caravaggio or, at the very least, to shadow his contemporary heroes DAIM, of course, DoesOne and Mad C.

Locally, and perhaps more realistically, he appreciates many of the established and, up and coming artists including Percy Fortini Wright, Chuck Hauck, and Jon Magnan, as well as, Chuck Boucher, Charlie Sorrento, and Mac Lamarre. There’s also Chelsea Arruda, Tim Clorius and Victor da Silva and, Turn, Enzyme, Kat Cope, and Macabre Ballerina.

As for media, he prefers to work in aerosol, gouache, and acrylics in exactly that order. He defines success as the ability to make a living doing what makes him happy. His art is his life and his life is Art as is his philosophy of both. Art is the visualization of the voice of the people. “I care about people and society and wish to bring Simple Bright Creations [his capitalization] to see and make them smile.

His advice for artists of any age is to make Art by, “Finding that place where you feel to create and follow your voice; not a structure. Art is meant to be free. But remember he says, “Graffiti doesn’t pay off… keep it legal.” 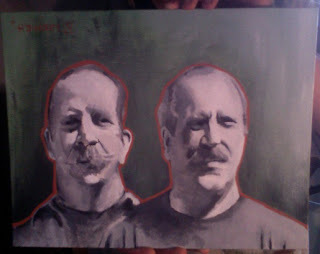