Fado – the national passion of the Portuguese people.  It is a tradition that is less than two hundred years old and, in Europe, that makes it quite young to be a tradition.

There were many performers in the Southcoast that we’d like to find out about including Cidalia Maria and Natalia Costa.  They were just two of the many that were a part of the Portuguese community’s entertainment venues.

But, this is Emilia’s story. She was very much a part of this transplanted culture and tradition. Fado is, according to Rui Vieira Nery, a cultural historian, and scholar, about a, “…characteristic sentiment of resignation, fatefulness, and melancholia.”

Aficionados refer to it as saudade, Portuguese for longing, passion and unrequited yearning.  It is an art form that may border on a spiritual or religious experience.

Fado comes from the Latin word fatum for fate, destiny, and doom.

Some would say that Fado is a form of Portuguese blues. I prefer to think of it as opera, another art form that came from the people; inspired by their happiness, sadness, and longing.

It is about love. Love of country. Love of place. Those who experience fado are either the singers, the musicians or the audience.

The Portuguese who immigrated to the Southcoast of Massachusetts, as well as other cities and towns, from California to southern New England and many places in between, brought Fado with them.  It was performed in many of the Portuguese cultural and civic organizations.

One fadista (performer of Fado) was Emilia Moraes (AKA – Emilia Morais or Emilia Fortier) who played the Portuguese-American club circuit from Ludlow and Chicopee, Massachusetts through the greater New Bedford area and, into Valley Falls in Rhode Island and, Newark and Elizabeth in New Jersey.

She was called Little Amalia by her fans.

Because of the sound and power of her voice, she was considered by many to be similar to the icon, the paragon and the definition of fado itself – Amalia Rodrigues.   Not bad for someone of Portuguese heritage born in Yonkers, New York.

Her parents moved the family back to the mainland of Portugal during the Depression.  It was in Caldas da Rainha, where the family reestablished itself that young Emilia started to demonstrate her ability to sing.

She sang most of the time to pass away the time or while doing her chores.  Nothing unusual there.  Encouraged by family and friends she taught herself the basics of Fado.

She returned to the United States on the S.S. Nacala, a freighter, shortly after the close of World War Two and went to live with her uncle and aunt in the north end of New Bedford, Massachusetts.

To support herself, she worked as a stitcher in the garment mills in the New Bedford area.  Somehow her name transitioned from Moraes to Morais in the process.

The Portuguese community back then was very vibrant and supported by several Portuguese language newspapers, radio stations and many entertainment venues including the Centro Luzo Americano where she often performed.

School auditoriums and the many Portuguese feasts including the ones held at the feast grounds on Stackhouse Street in South Dartmouth were where the Portuguese could stay connected to their cultural heritage.

Her marriage in 1951 to a French-Canadian man didn’t last long and she took her son with her to live with her uncle, Luis Antunes, in New York City.  Her uncle had published several Portuguese language newspapers in this area and continued to do so in New York.

While there, Emilia continued her quest.

She took voice lessons from David Sykes and performed at many Portuguese clubs in New York and New Jersey.  In December of 1956 in Newark, New Jersey, she was the headliner and most likely sang her two signature selections: Meu Querido Portugal (My Dear Portugal) which, she wrote and, her favorite standard, Que Deus Me Perdoe (May God Forgive Me).

Trying to keep a fledgling career afloat and raise an infant son is always a challenge.  It was even more challenging in the 1950’s.  Single mothers weren’t the norm.  She worked days as a sample maker in New York City’s garment district where little English and no Portuguese was spoken.

She quickly learned to speak Spanish, learned to sing American popular songs such as Fascination, Rags to Riches, and other hit songs of the day.  Emilia trundled her son from venue to venue when she had to.

Eventually, she fell out of grace with her uncle and moved from the East Side of the city near the east gate of Central Park to the West Side on Columbus Avenue.  The Spanish came in handy in what was then known as Spanish Harlem.

As this news clipping (Teve Grande Assistencia…) from the local Portuguese newspaper, the Diario de Noticias, stated, she was still singing her signature selections.  Emilia returned to New Bedford in the early sixties and remarried but, her new husband, a fisherman, wasn’t too keen on having his wife go on as a club singer.

Ah, and there’s the rub.

Being a fadista was bittersweet no matter what.  Even with any acclaim or fame many fadistas, the women who sang Fado, were considered just a step above women working the streets by some.

Portuguese culture and tradition were not completely integrated with the American way at that time.  Gender roles and other rules, seen as archaic today, still applied back then.

But what is most interesting at this writing is, whatever happened to all of the musicians and performers of that day and age that she was acquainted with?  This question is especially poignant today especially because of the somewhat unexpected resurgence of Fado.

Unexpected because of its source.  Many of the new Fado singers are in their twenties.   Most of them have never heard it performed live.  Almost all of them are self-taught.

And perhaps what is most incredible is, that they learned how to sing Fado by watching vintage performances on YouTube!  Imagine that.  Many artists never achieve their dreams.  Painters, writers or musicians.

It doesn’t matter she says.

Some do.  Many give up.  Some don’t.  Every artist has a reason for doing what they do.  Yes, many seek fame.  Others seek fulfillment.  Whatever their level of success,  they’ve each contributed something valuable into the fabric of our local culture.

One of Emilia’s last performances was for a benefit concert at the Immaculate Conception School auditorium on Earl Street on Sunday, February 24th in 1963.  On that same bill was José Pereira de Melo, Teresa Ana Cabral, as well as Lucília Mota Rioux, Kevin Rodrigues and Maria Gimong who was known back then as the Portuguese Sophie Tucker.

She is now in her mid-nineties and living in Figueira da Foz, Portugal.  Ironically, it’s something she swore she would not do. When her family returned to the mainland and settled in Caldas da Rainha, they were considered “the Americans” and, as such had to deal with the ensuing social and philosophical clashes.

To compound matters, her father Eduardo was a crypto-Jew in a devoutly Catholic country.  All of these elements helped to form the soul of a future fadista.  Emilia returned to Portugal to take care of some family business and due to those obligations, a short stay became an extended stay which, has resulted in a permanent stay.

Ah, obligations.  They are stitched to and are synonymous with fate, destiny, and doom.  This is the way of life.  This is Fado and it is a life touched by happiness, sadness, longing and our unrequited yearnings and unfulfilled dreams.  It is the story of a fadista and, my mother Emilia Moraes Fortier Duwart.

PUBLISHER’S NOTE: This is an updated version of what was the first profile article of many others in an initial attempt to document the lives and activities of the individuals, both past and present, who represent the cultural and creative community.  These are the artists who drove/drive the local creative economy. 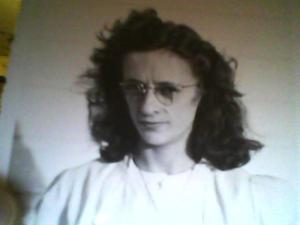 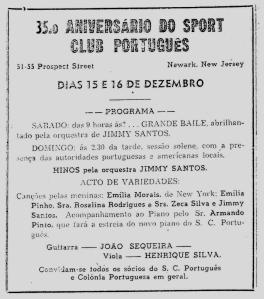